PLEASE NOTE: Although I initially wrote this post about the Drobo 5N, several commenters have pointed out that the Drobo 5N & 5D use the same chassis & so this is equally helpful for fixing noisy Drobo 5D fans too. 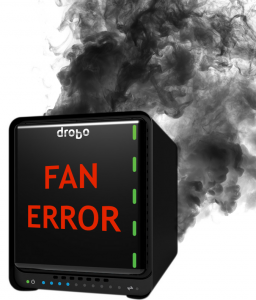 Drobo makes a nice backup system, but the cooling fans are crap. The fan in my Drobo 5N was no exception & failed after 3 years, most of which it spent on standby with the drives spun down. As far as I know, the Drobo cooling fan runs constantly even when the drives are spun down.

Also see the very helpful comments on these steps from Tad Harrison — the 3rd comment at the end of this post.

Now you’re ready to put everything back together. Really this is just an excuse to start the instruction numbering over at #1. Also now that you’re in this deep, let’s make putting your Drobo back together look like 4 steps:

Hope the new fan lasts longer than the old one.